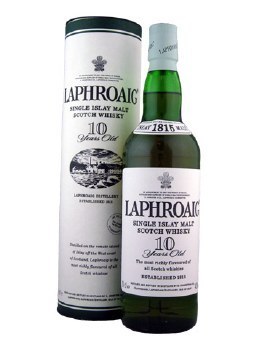 ABV 40%
Laphroaig 10 Year Old is an all-malt Scotch Whisky from the remote island of Islay in the Western Isles of Scotland. Laphroaig, pronounced "La-froyg", is a Gaelic word meaning "the beautiful hollow by the broad bay".
In making Laphroaig, malted barley is dried over a peat fire. The smoke from this peat, found only on Islay, gives Laphroaig its particularly rich flavour.
Laphroaig is best savoured neat, or with a little cool water. Roll it around on your tongue. Release the pungent, earthy aroma of blue peat smoke, the sweet nuttiness of the barley, the delicate heathery perfume of Islay's streams. It is as unique as the island itself.
COLOUR: Full sparkling gold
NOSE: Huge smoke, seaweedy, "medicinal", with a hint of sweetness
BODY: Full bodied
PALATE: Suprising sweetness with hints of salt and layers of peatiness
FINISH: Lingering