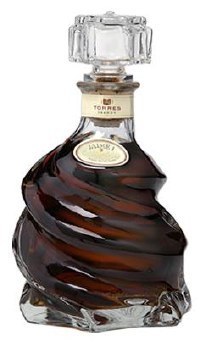 ABV 40%
In the 18th century, the Torres family bought their first vineyard in the Penedès region. A century later, in 1870, the House of Torres, producer and exporter of wines was founded by Jaime Torres Vendrell. It was at this time that great works. The Casa Milá, known as "La Pedrera" is the most representative building of that intensively creative period of modernism in Barcelona. In homage to the figure of Gaudí and of the innovative spirit of those men whose philosophy of a "job well done" was passed from father to son, the House of Torres created this old noblesse brandy which carries the founder’s name. La Pedrera belongs to La Caixa de Catalunya and the bottle was designed by the architect Tanaka.
Origin
The Jaime I brandy has been made with very old ‘soleras’ aged from selected distilled white wines. Some of the soleras started off as distilled Parellada wines destined for our Torres 10 brandy, and which have been kept aside for many years to create a valuable reserve stock.
These old reserves have been enriched with our best soleras, the oldest being 30 years old. Finally, to complement the aromatic intensity of these brandies with lighter fruity and floral notes, we have added a small amount of 1972 eau-de-vie of Folle Blanche lees, the rarest and noblest of grapes, used to make the highest quality pot still brandies
Tasting Notes
Jaime I is deep, rich and dark amber in colour. It displays a concentrated complex bouquet, with marked overtones of coconut, dried fruits and spices, typical of lengthy ageing. Round and lush, it has the smoothness that characterises great brandies. Jaime I is complex, majestic, with a lingering finish that leaves a velvety imprint on the palate.