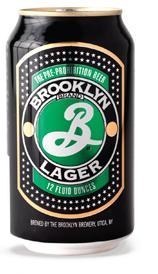 ABV 5.2%
The Brooklyn Brewery is a leading Craft Brewer in the US. It is based in New York where Brooklyn Lager is the 5th best selling Draught beer.
In the late 1800’s the Brooklyn area in New York, was one of the largest brewing centres in the United States being home to over 45 breweries. Nowadays the Brooklyn Brewery, still based in New York, is one of the leading Craft brewers in the United States. They produce a wide range of beer varieties including Lager, Pilsner, EIPA, Brown Ale and Summer Ale.
The brewery’s flagship beer, Brooklyn Lager is the No.5 selling draught beer in New York, no mean feat considering it outsells the likes of Miller, Coors Light and Heineken there. Brooklyn Lager is an intensely flavoured Hoppy beer with a slightly bitter taste.