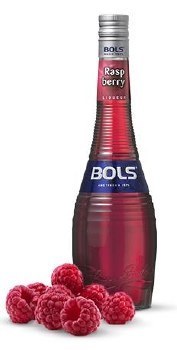 ABV 17%
BOLS Raspberry is a deep red liqueur made with real, natural flavour directly extracted from fresh raspberries and distilled. The deep red liqueur is light on the palate and boasts a full-on raspberry flavour that gradually becomes sourer.
Although raspberry liqueurs have been popular in the USA for quite some time, it is only recently that European bars began to stock them, despite the fact that most raspberry liqueurs are made in Europe. Bols Raspberry is a tangy liqueur, with the real taste of fresh raspberries and a slight citrus edge. Bols Raspberry’s success in Europe has been helped by the French Martini and the Raspberry Collins.